We 7th and 8th graders have done something more than just speaking about having our voices heard. We are ACTUALLY speaking out and voicing our opinions to make a difference and change in the communities that we live in. On Tuesday, April 12th, 2016, a small group of 7th and 8th graders (Kateri Gerald-Burns, Arianna Rodriguez, Emmanuel Dejion-Louise, Kayleen Guzman, Ezekiel Freeman-Fanfan, and Ajarae Walcott), headed downtown to Boston City Hall to make a presentation to the Boston Art Commission which is part of the Mayor’s Office of Arts and Culture. It’s exciting to know that people of higher power are eager to listen to and hear our voices and see how we came to write letters to the Boston Globe and the Art Commission advocating for a Frederick Douglass statue that would take shelter in the Roxbury community. Instead of giving speeches, we prepared a skit to demonstrate the process of how we developed our ideas. Here are some of our arguments on behalf of a Frederick Douglass statue in Roxbury: 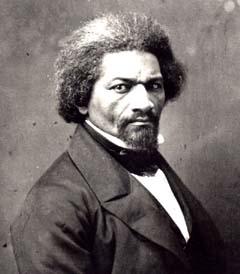 Frederick Douglass was one of the most important abolitionists to fight for the freedom of slaves.

Frederick Douglass represents the power of the black community. We need a statue of him so people of color have a symbol of courage.

A statue can say 1,000 words just by looking at it. Mario Chiodo’s statue of Frederick Douglass says, “Follow me and struggle for freedom.”

The statue shows Douglass as a black hero rising from broken chains.

Another reason to build a statue of Douglass in Roxbury is because our urban communities need inspiration. The statue gives a message to African Americans, Latinos, and Whites not to let anything get in the way of our dreams.

A charming young man and an eagle-eyed photographer came to hear our voices. “Who is he?” you ask. Astead Herndon, an amazing Boston Globe reporter who encouraged us to speak out to the public, came to cover our story. LOOK FOR HIS STORY ABOUT US IN THE BOSTON GLOBE NEWSPAPER!